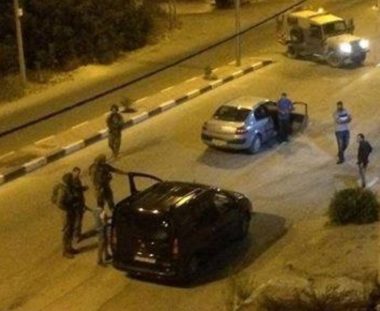 Israeli soldiers abducted, on Tuesday at dawn, three young Palestinian men from the southern West Bank governorate of Hebron, and invaded many neighborhoods in the city, and nearby towns, in addition to installing military roadblocks.

The Hebron office of the Palestinian Prisoners’ Society (PPS) said the soldiers abducted Mahmoud Amer Abu Shaker, 19, from his home in the city.

The PPS added that the soldiers also stormed and ransacked homes in Doura town, south of Hebron, and abducted Hamza Nader Abu Ehlayyel, 19.

It also stated that the soldiers abducted Bilal Na’im Ja’afra, 24, from his home in Tarqoumia town, west of Hebron city.

In addition, the soldiers installed many roadblocks on roads leading to Hebron city, searched dozens of cars ad interrogated the Palestinians while inspecting their ID cards.

The soldiers also invaded the towns of Sa’ir, Bani Neim, Yatta and ar-Reehiyya, and installed roadblocks on roads leading to Sa’ir, ath-Thaheriyya and Jouret Bahlas area, before stopping and searching dozens of cars, and interrogated many residents while inspecting their ID cards.

Late on Monday at night, the army invaded Sa’ir and clashed with dozens of local youngsters, after the soldiers invaded homes in the Dowwara area.