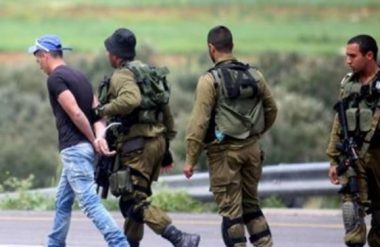 Israeli soldiers abducted, on Monday at dawn, three Palestinians in Hebron governorate, and two in Bethlehem, after the army invaded several homes and searched them.

Mohammad Awad, a media activist from Beit Ummar town, north of Hebron, said the soldiers invaded ‘Aseeda, the ath-Thaher and downtown areas, and searched many homes.

Awad added that the soldiers abducted an engineer, identified as Ramzi Mohammad Sabarna, 24, from his home in Aseeda area, and took him to Etzion military base and security center, north of Hebron.

In Hebron city, the soldiers abducted Yousef Abu Hussein, 30, and former government minister Issa Ja’bari, after breaking into their homes and searching them.

The soldiers also installed many roadblocks at the entrances of Sa’ir and Halhoul towns, in addition to Hebron’s northern road, before stopping and searching dozens of cars, and interrogated many Palestinians while inspecting their ID cards.