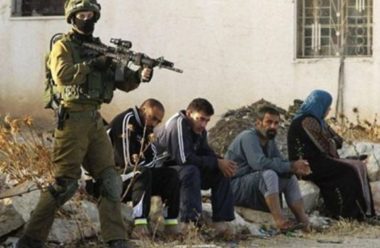 Dozens of Israeli soldiers invaded, on Wednesday at dawn, Shweika area, north of the northern West Bank city of Tulkarem, searched and ransacked dozens of homes, and abducted twelve Palestinian, including one woman, and siblings, in addition to interrogating many Palestinians.

Eyewitnesses said many armored military vehicles surrounded the area, before invading it, and initiated violent searches of dozens of homes, while interrogating many Palestinians.

The soldiers also detained and interrogated scores of young Palestinian men, in front of their homes.

It is worth mentioning that Shweika area has been under a strict siege, and ongoing violent invasions and searches of homes, in addition to many abductions among its residents, since the fatal shooting at an Israeli colony, last Sunday west of Salfit.

The army abducted many family members of the reported shooter, Ashraf Na’alwa, during ongoing attempts to arrest him, and also decided to demolish the family home.