Army Abducts A Teen Near Qalqilia 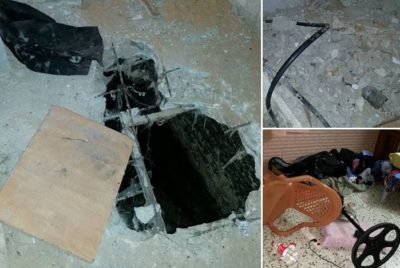 Israeli soldiers abducted, on Tuesday at night, a Palestinian teenage boy,   at a military roadblock, in addition to searching many homes and lands, at dawn Wednesday, in several communities in Qalqilia governorate in northern West Bank.

The Qalqilia office of the Palestinian Prisoners Society (PPS) said the soldiers invaded and ransacked several homes in Baqat al-Hatab village, east of the city, and interrogated many Palestinians.

It added that the soldiers also abducted, at night, Bara’ Luay Yousef, 16, while crossing a military roadblock in Hibla town, south of Qalqilia.

Eyewitnesses said dozens of soldiers invaded Baqat al-Hatab, before forcing many families out of their homes, and violently searched the properties, causing excessive property damage.

They added that the soldiers smashed the tiles of at two homes, and caused excessive damage to walls and furniture, while violently searched the properties, specially the home of Na’el Barghouthi and Soheib Barghouthi.

Also at dawn, dozens of soldiers invaded Shweika area, north of the northern West Bank city of Tulkarem, searched and ransacked dozens of homes, and abducted twelve Palestinian, including one woman, and siblings, in addition to interrogating many Palestinians.