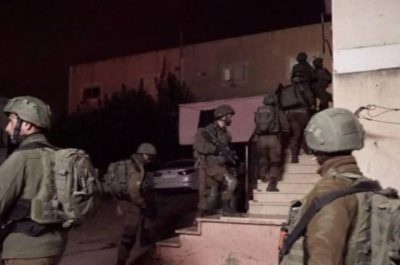 Israeli soldiers abducted, overnight and at dawn Wednesday, 24 Palestinians, from several parts of the occupied West Bank, including 15 from Tulkarem, the Palestinian Prisoners’ Society (PPS) has reported.

The Tulkarem office of the PPS, in northern West Bank, said the soldiers conducted very violent searches of many homes, causing serious property damage, especially when the soldiers damaged furniture and removed tiles during the invasions.

It added that the soldiers abducted fifteen Palestinians, mainly from Shweika area, including one woman, identified as:

It is worth mentioning that Shweika area has been under a strict siege, and ongoing violent invasions and searches of homes, in addition to many abductions among its residents, since the fatal shooting at an Israeli colony, last Sunday west of Salfit.

The army abducted many family members of the reported shooter, Ashraf Na’alwa, during ongoing attempts to arrest him, and also decided to demolish the family home.

Waleed, Ashraf’s father, is the latest family member to be abducted by the soldiers, who also frequently interrogated his entire family, and repeatedly invaded and ransacked their homes.

In Qalqilia, in northern West Bank, the soldiers abducted Bara’ Yousef, 17, after stopping him at a military roadblock.

In Hebron, in the southern part of the West Bank, the soldiers abducted Amro Sleibi, Sayyaf Ibrahim Asafra and Yazan Ahmad Asafra, from Beit Ummar and Beit Kahil towns.