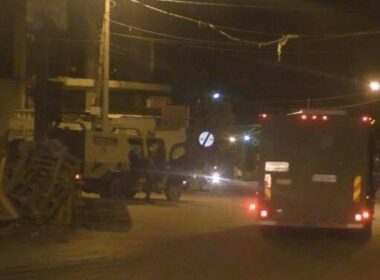 On Thursday at dawn, Israeli soldiers abducted at least twenty-four Palestinians, including siblings, from their homes in several parts of the occupied West Bank after the soldiers invaded many communities and violently searched dozens of homes. The army also shot one Palestinian with live fire in Bethlehem.

The soldiers also detained a former political prisoner, Bassam Abdul-Rahma Hammad, 48, along with Luay Noah Hammad, 36, and Mohammad Jibril Hammad, 30, and released them after a few hours of interrogation.

It is worth mentioning that Bassam is the father of Anas Hammad, 21, who Israeli soldiers killed on December 4th, 2015.

In Beitin village, northeast of Ramallah, the soldiers abducted Raed Taye’ Hamed, the head of Beitin Village Council, after invading his home and searching it.

Another former political prisoner, Wisam Qatesh, was abducted from his home in Ein Yabrud village, east of Ramallah.

Furthermore, soldiers invaded the as-Samu town, south of Hebron in the southern part of the West Bank, and abducted Hamza Mohammad Rawashda after invading his home and searching it.

They added that regular army units surrounded the home before breaking into it and interrogated the family for a few hours while violently searching the property.

The soldiers informed the family that they also wanted to arrest Amin, but he wasn’t at home and told them he needed to head to the nearby military base.

In addition, the soldiers abducted Mo’in Alawna from his home in the town after storming his home and searching it.

In Deir Abu Da’if town, east of Jenin, the soldiers abducted Mohammad Mahasna, after invading his home and ransacking it.