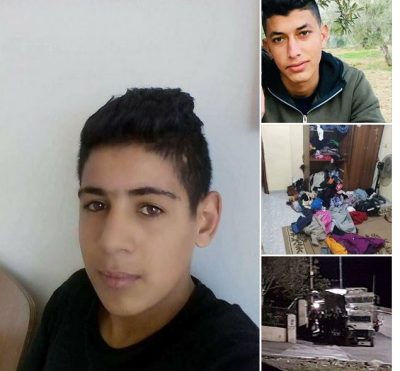 Israeli soldiers abducted, on Sunday at dawn, two Palestinian children, and a young Palestinian man with French citizenship, in Bethlehem and Tulkarem, and summoned a child for interrogation.

The Bethlehem office of the Palestinian Prisoners’ Society (PPS) said the soldiers invaded and searched homes in Teqoua’ town, east of the city, and abducted Mahmoud Thieb al-‘Amour, 14, and Mohammad ‘Adel ash-Sha’er, 16.

It added that the soldiers summoned a child, identified as Saif Mohammad al-‘Amour, only twelve years of age, for interrogation in Etzion military base and security center, south of Bethlehem.

In addition, the soldiers invaded a home, inhabited by college students in Tulkarem city, in northern West Bank, and abducted Hilal Qamar Turki, who also holds a French citizenship.

Also at dawn, the soldiers invaded many homes in the southern West Bank city of Hebron, in addition to nearby Halhoul, Beit Ila and Kharas towns, searched many homes and installed roadblocks.