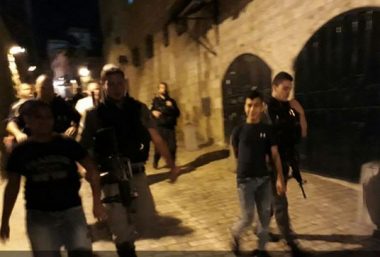 Israeli soldiers invaded, earlier on Friday morning, the town of Silwan in occupied East Jerusalem, searched homes and abducted two children. The soldiers also invaded many homes in the governorates of Jenin, Bethlehem and Ramallah.

Media sources in Jerusalem said dozens of soldiers invaded Silwan town from several directions, before storming homes and searching them.

They added that the soldiers abducted Mahmoud al-A’war, 16, and Islam Natsha, 15, and took them to an unknown destination.

Furthermore, the soldiers invaded ‘Arraba town, southwest of the northern West bank city of Jenin, and stormed a blacksmith workshop which was shut down under a direct military order a week ago, after the army confiscated all of its machines and tools.

In northern West Bank, the soldiers invaded many areas in villages and towns, south and southwest of Jenin, especially the towns of Ya’bad, Jaba’ and Fandaqumiya, while dozens of soldiers were deployed on main roads linking Jenin with communities, east of the city.

Another Palestinian, identified as Ehab Issa Omar, 34, from Beit Jala city, west of Bethlehem, was also summoned for interrogation after the soldiers invaded his home.

In related news, the soldiers invaded Betunia town, west of Ramallah, and summoned Osama al-Jamal and his brother Hammouda, for interrogation, after breaking into their homes and confiscating surveillance equipment.

The invasion led to clashes between the soldiers and local youngsters, especially near a high school, before the soldiers fired many gas bombs and concussion grenades.