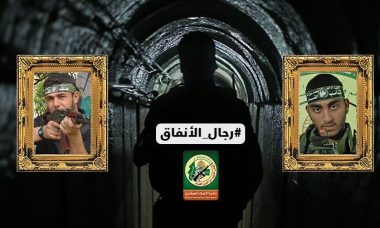 The Al-Qassam Brigades, the armed wing of Hamas, has reported Friday that two of its fighters were killed, on Thursday  evening, in two separate incidents, when border tunnels collapsed on them.

Al-Qassam Said the Khalil Bassem ad-Dumyati, 32, from Sheikh Radwan neighborhood in Gaza city, was killed when a border tunnel collapsed on him.

It added that another fighter, identified as Yousef Sabri Abu ‘Abed, 22, from Bani Sohaila in Khan Younis, in the southern part of the Gaza Strip, was killed in a similar accident.

Hundreds of Palestinians, mainly tunnel workers not affiliated with any group, have been killed in siege-busting tunnels in the Gaza Strip, largely after the tunnels collapsed on them.

In April of this year, al-Qassam said that one of its fighters, Anas Mousa Abu Shaweesh, 20, from the Tuffah neighborhood, in Gaza City, was killed when a tunnel collapsed on him.

In February of this year, three civilian tunnel workers, identified as Abdullah Waleed an-Namooli, 23, Salama Suleiman Abu Shousha, 24, and Obeid Mohammad Soufi, 25, were killed when a siege busting tunnel collapsed on them.