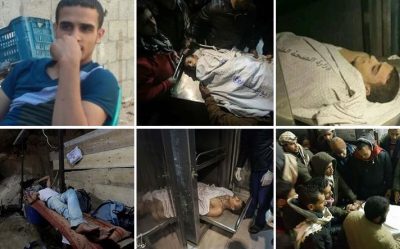 Palestinian medical sources have reported, Saturday, that three workers were killed, and five others were injured, after inhaling gas while working in a siege-busting tunnel, on the Egyptian border.

The workers were conducting maintenance work in the tunnel, on the Egyptian border with Rafah, in the southern part of the Gaza Strip,

The three slain Palestinians, and the five wounded, were all moved to Abu Yousef an-Najjar Hospital, in Rafah.

The tunnel they were trying to fix was destroyed by the Egyptian army, last Thursday, and was used for as a trade tunnel to smuggle goods and supplies to the besieged coastal region.

Last week, rescue workers in Gaza located the corpse of a Palestinian under the rubble of a tunnel that was flooded by the Egyptian army.

Hundreds of Palestinians have been killed in tunnels in the besieged coastal region; mostly after the Israeli army bombarded them, while many died in tunnel collapse accidents, electrocution, and several others died after the Egyptian army bombarded, or flooded, the tunnels.

While some are members of Al-Qassam Brigades of Hamas, and other factions, most of the workers in the tunnels are not affiliated with any group, and resorted to work under very dangerous conditions to provide for their families amidst the ongoing deadly siege on the coastal region.