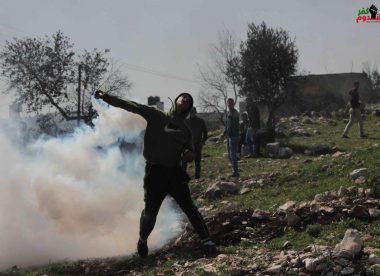 Israeli soldiers attacked, Friday, the weekly nonviolent protest in Kufur Qaddoum, in the northern West Bank district of Qalqilia, and fired dozens of rubber-coated steel bullets and gas bombs, wounding two Palestinians, including a child, and causing nine to suffer the severe effects of teargas inhalation.

Morad Eshteiwy, the coordinator of the Popular Committee in Kufur Qaddoum, said the soldiers resorted to excessive force, leading to clashes, and fired dozens of rubber-coated steel bullets and gas bombs.

It is worth mentioning that Salim is a volunteer cameraman for the Israeli Information Center for Human Rights in the Occupied Territories (B’Tselem).

At least nine other Palestinians suffered the severe effects of teargas inhalation, and received the needed treatment.

Eshteiwy stated that the clashes took place in the town just after many Israeli army vehicles invaded it, and the soldiers started firing gas bombs and rubber-coated steel bullets.

The procession started from the center of the village, when dozens marched while chanting for national unity, and ongoing resistance against the Israeli occupation of Palestine.