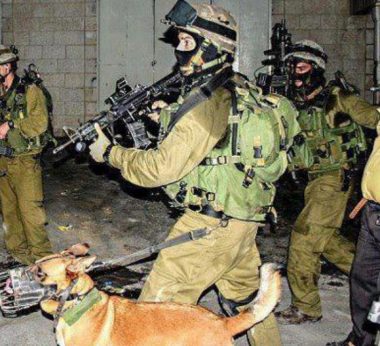 Dozens of Israeli soldiers invaded, on Thursday at dawn, the northern West Bank city of Tulkarem, and fired many live rounds and gas bombs, before breaking into homes, and abducted two Palestinians.

Eyewitnesses said the soldiers invaded the city from several directions, before firing many live rounds and gas bombs.

They added that the soldiers invaded and violently searched many homes in the city, and abducted two Palestinians, in their thirties, identified as Samer Ghanem and Hasan Abu Zanat.

Also at dawn, the army invaded Qalandia refugee camp, north of occupied East Jerusalem, before breaking into a home, and assaulted a young man and his father, causing various cuts and bruises.

Medical sources said that the soldiers assaulted Ata Lati, and his son Wisam, after storming their home during early dawn hours, causing many cuts and bruises.

It is worth mentioning that Ata is the father of Mohammad Lafi, who was killed by the army on July 21, 2017.

In addition, dozens of Israeli soldiers invaded several villages and towns in the southern West Bank district of Hebron, broke into and searched homes, and illegally confiscated a large sum of cash from one home.