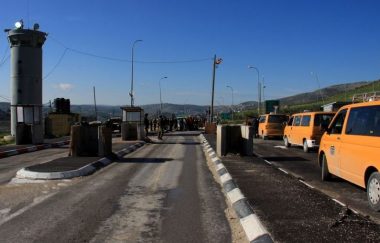 Israeli soldiers abducted, on Thursday evening, and on Friday at dawn, two Palestinians from West Bank districts of Hebron and Tubas; the army broke into and searched many homes in the Hebron district and violently searched them.

Dozens of soldiers invaded Hneina area, in Doura town, southwest of the southern West Bank city of Hebron, surrounded many homes before invading them, and abducted a young Palestinian man.

The Hebron office of the Palestinian Prisoners Society (PPS) said the soldiers imposed a tight siege on a home belonging to Fasfous family, reportedly looking for a “wanted Palestinian hiding inside,” and invaded the property but could not locate their target despite extensive and violent search of the property.

The soldiers also searched many homes belonging to members of Nammoura family, and abducted a young man, identified as Amjad Nammoura.

The PPS said the soldiers used loud speakers demanding what the army called “wanted Palestinians” to surrender, but could not locate any of them, and instead abducted Amjad.

On Thursday evening, the soldiers abducted a young man, identified as Zaher Mohammad Wahdan, 24, after stopping him at the Huwwara roadblock, south of the northern West Bank city of Nablus.

The PPS stated that Wahdan, from Tammoun town, south of Tubas, was returning home from Ramallah when the soldiers stopped him at the roadblock.