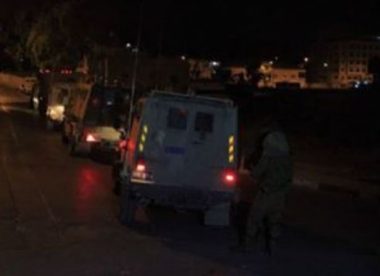 Israeli soldiers abducted, on Friday at dawn, two Palestinians, including a teenager, from their homes in Teqoua’ town, east of Bethlehem in the occupied West Bank.

The soldiers invaded and ransacked several homes in the town, and abducted Mustafa Jamal al-Badan, 17, and Ziad Taleb Khalaf, 21.

In related news, a family of a Palestinian from Qabatia town, south of the northern West Bank city of Jenin, received credible information that their son, who went missing two days ago, was taken prisoner by the soldiers at a military roadblock between Jenin and Ramallah.

When Palestinians are taken prisoner by the soldiers outside of their homes, especially on military roadblocks away from people who know them, Israel does not inform the families about the arrests, and the families have to start looking for them, and seek the help of several organizations, mainly the Red Cross that starts inquiring with the Israeli authorities.