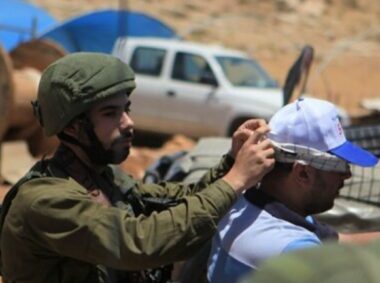 Updated: The Palestinian Prisoners’ Society (PPS) has reported that Israeli soldiers abducted, earlier Sunday, three Palestinians during invasions and searches of homes in Hebron and Ramallah governorates, in the southern and central parts of the occupied West Bank.

The PPS said several army jeeps invaded Doura town, southwest of Hebron, before the soldiers searched and ransacked many homes, including the home of a political prisoner, identified as Ismael Hussein al-Awawda, and abducted his son, Aseed.

The PPS added that the soldiers also invaded Sa’ir town, northeast of Hebron, and abducted Isamel Fawzi at-Tarwa, 30, after invading and violently searching his home and the homes of his brothers, Zeid and Fuad.

The soldiers also invaded the Sheikh neighborhood in the center of Hebron city, before storming and ransacking the homes of Mojahed Haitham Qawasmi, Issa Qawasmi, and Ali Qawasmi.

During the invasions, the soldiers inspected the ID cards of many Palestinians while interrogating them.

In Ramallah, in central West Bank, the soldiers invaded the al-Jalazoun refugee camp, north of the city, searched a few homes, and abducted Yousef Oleyyan.

On Sunday at dawn, the soldiers abducted three young Palestinian men from their homes in Qabatia town, south of the northern West Bank city of Jenin.

The soldiers also abducted three young men from their homes in Harmala village, east of Bethlehem, south of the occupied Palestinian capital, Jerusalem, in the West Bank.

On Saturday, the soldiers invaded the northern and eastern areas of Bruqin town, west of Salfit in central West Bank, before launching a drone to photograph several Palestinian homes, structures, and lands, in addition to their surrounding areas.