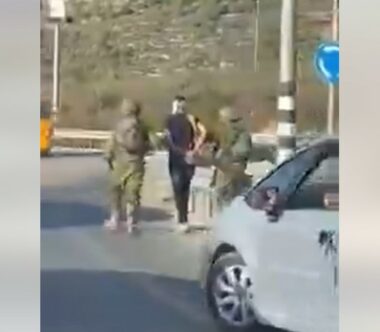 On Saturday evening, Israeli soldiers abducted two Palestinians, including a former political prisoner, from Jenin and Ramallah, in the northern and central parts of the occupied West Bank.

Media sources said the soldiers abducted a former political prisoner, Nidal Ziad al-Amer, from the Jenin refugee camp, after stopping him at the Dotan military roadblock near Ya’bad town, south of Jenin.

The sources added that the soldiers abducted another young man from Ein Siniya village, north of Ramallah, after stopping him at a sudden military roadblock near the village. His name was unknown at the time of this report.