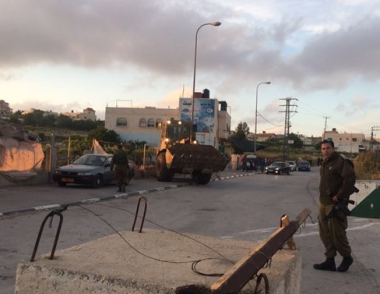 Israeli soldiers invaded, on Monday at dawn, Beit Rima town, northwest of the central West Bank city of Ramallah, and abducted one Palestinian. The soldiers also abducted a teenager in Qalqilia city, and detained many young men at a military roadblock near Jenin, in the northern part of the occupied West Bank, in addition to detaining another Palestinian near Hebron.

The soldiers also invaded Qalqilia city, before searching homes and abducted a teenage boy, identified as Ala’ Nihad Abu ‘Assab, 17.

Furthermore, the soldiers installed a sudden military roadblock at the main entrance of Qabatia town, south of Jenin, in the northern part of the West Bank, searched many cars while inspecting the ID cards of the passengers, and detained many young men for several hours, while interrogating them.

In Hebron, in the southern part of the West Bank, the soldiers detained Hamdi Mohammad al-Froukh, and released him after holding him for several hours.

The army also initiated extensive searches in Beit ‘Anoun and Wad Khamis areas, north of Hebron, after the soldiers said a Molotov cocktail was hurled at their jeep.