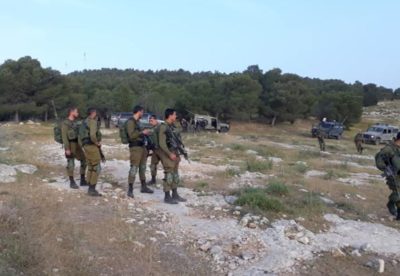 Israeli army spokesperson claimed that the soldiers saw two Palestinians near Ein Bonin, before stopping and searching that, and “found a knife.”

The spokesperson added that the soldiers arrested the two Palestinians and took them to an interrogation facility run by the Israeli Security Agency.

It is worth mentioning that on August 23rd, and Israeli teen, identified as Rina Shnerb, 17, was killed, while her brother Dvir, 19, suffered serious wounds, and her father Eitan, 46, was mildly injured, when an improvised explosive went off near them while they were hiking near Ein Bonin spring.