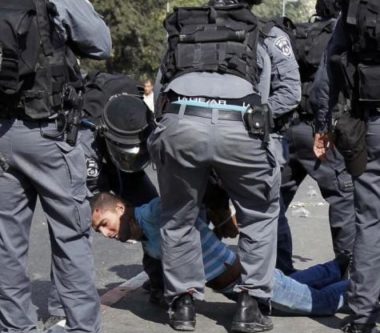 Israeli soldiers abducted, on Wednesday evening, two young Palestinian men during a nonviolent procession against a conference held by colonialist settlers in Sheikh Jarrah neighborhood, in the center of occupied East Jerusalem.

Media sources said several Palestinians managed to enter the area of the gathering, before the conference started, and chanted against the ongoing illegal Israeli occupation of Palestine, and its illegal colonialist activities, especially in occupied Jerusalem.

They added that dozens of soldiers surrounded the area, and chased many activists, before abducting two young men, identified as Amer Balbeesi and Ehab Shalabi.

The soldiers also closed the main street in the Palestinian neighborhood, before stopping and searching dozens of residents while inspecting their ID cards.

Despite the violent Israeli attack against the nonviolent protesters, the Palestinians managed to prevent the conference from taking place.

In related news, Israeli sources said the army has detained three young Palestinian men from Jerusalem, reportedly after they hurled Molotov cocktails at soldiers and a gas station near Maali Adumim colony.