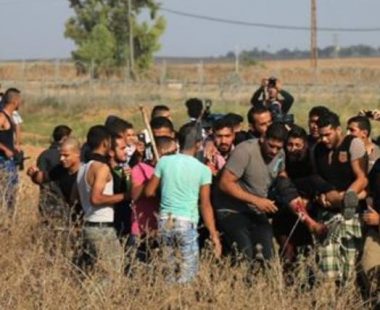 Media sources said the soldiers fired many live rounds at Palestinian protesters, wounding one Palestinian who was rushed to Beit Hanoun hospital for treatment.

They added that the soldiers also fired live rounds and gas bombs at Palestinian protesters, east of Abasan town, east of Khan Younis, in the southern part of the Gaza Strip.

It is worth mentioning that, on Monday evening, September 10th, the soldiers fired dozens of live ammunition and gas bombs at Palestinians, and fishing boats, in the al-Waha Beach area, northwest of the Gaza Strip, wounding 49 Palestinians, including one journalist, during a nonviolent activity calling for lifting the illegal Israeli siege on Gaza.