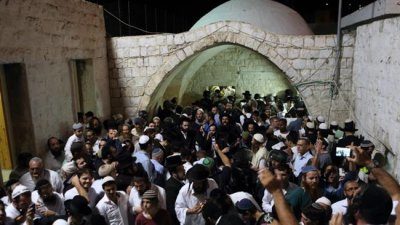 Fifteen buses of Israeli settlers, accompanied by Israeli soldiers in armored vehicles and jeeps, invaded the Nablus area in the northern part of the West Bank Sunday night to hold a religious ceremony at the site known as “Joseph’s Tomb”. The soldiers fired tear gas and live ammunition at the Palestinian youth who came out to challenge the invasion, injuring one young man in the foot with live fire.

The injured Palestinian, identified by local sources as Mahdi Dweikat, 20, was hit by multiple live rounds in the foot, and taken to the city hospital in Nablus. Others suffered from tear gas inhalation.

The settlers who invaded the site remained at the tomb through Sunday night until Monday morning, under heavily-armed Israeli military guard.

The site is located near Balata refugee camp, which is home to thousands of Palestinians displaced from what is now Israel in 1948 and 1967, and unable to return to their homes.

Every month, hundreds of Israeli settlers make a religious pilgrimage to the site, accompanied by a heavily-armed military patrol.

This month, the invasion took place on the second night of Chanukah, and the number of Israeli settlers participating in the event increased to nearly a thousand.

The site known as ‘Joseph’s Tomb’ is considered sacred to Christians, Muslims and Jews. But the area where it is located is under Israeli martial law, and has been since 1967.