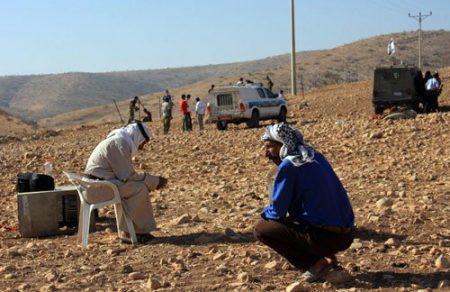 Israeli authorities, on Monday, served demolition threats to 20 Palestinian-owned facilities in the town of Yatta, southern Hebron Hills, for lack of building permits.

The town is situated in area C of the occupied West Bank, which is under Israeli civil and military control.

The residents of area C have always been subject to such threats, ending in demolition and displacement, as building permits are rarely ever issued to Palestinians, forcing them to build without one.

Local activist Rateb Jabour affirmed, according to the PNN, that Israeli civil administration crews handed demolition notifications against 16 houses south of the town, in addition to a mosque and three solar units.

The notified facilities were funded by international organizations.

Demolitions in the occupied West Bank and Jerusalem have seen an unprecedented upsurge in recent months, as Israeli authorities demolished 905 Palestinian structures in the occupied Palestinian territories, so far this year, increasing from 453 in all of 2015, according to UN documentation.