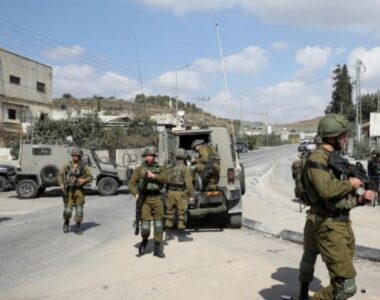 Two Palestinians were wounded by rubber-coated metal bullets, and four others were beaten on Friday, and 15 vehicles were destroyed, during clashes between Palestinian villagers and invading Israeli forces and settlers in the village of Jureish, east of Nablus.

The head of the village council, Raed Abu Jamous, told the official Palestinian news agency, Wafa, that Israeli settlers came to the settlement outpost, which they started to establish since Friday morning, on the village lands, under the protection of the occupation army, and the local Palestinian residents confronted them, which led to the outbreak of confrontations.

Abu Jamous added that the occupation forces fired rubber-coated metal bullets, wounding two young men, in addition to the settlers beating 4 young men with sticks, and smashing the windows of 15 vehicles with stones.

It is noteworthy that the settlers established a new settlement outpost on the lands of the village of Jureesh, at dawn on Friday.

The Palestinian official in charge of the settlement file in the northern West Bank, Ghassan Douglas, said that a group of settlers stormed the “Waar Jameh” area of ​​Juresh lands, and established a new settlement outpost, where they set up a number of caravans in the area.

Douglas confirmed the escalation of settlement activity in the Nablus countryside, as well as the expansion and leveling works in a number of settlements, at the expense of local Palestinian-owned lands.