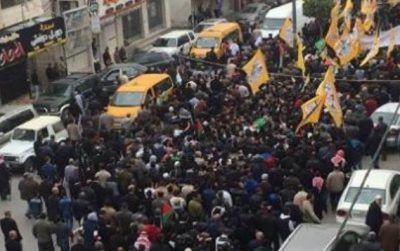 Israeli soldiers assaulted, Sunday, dozens of Palestinians marching nonviolently against the Annexation Wall and colonies, in the center of Hebron city, in the southern part of the occupied West Bank, and abducted a local volunteer with the Israeli Information Center for Human Rights in the Occupied Territories (B’Tselem).

They called for a life with dignity, free from occupation, colonization and oppression, and for resistance to Israel’s illegal policies of segregation and apartheid, especially the recent Israeli decision signed by the Head of the Central Command, Major General Roni Numa, establishing a municipal services administration for the Jewish settlers in Hebron.

The procession was organized by the Youth Coalition Against Settlements, the International Committee Against Racism and Apartheid, in addition to the  Salayma and Gheith families.

The demanded an end to the illegal Israeli occupation of Palestine, the preservation of the Palestinian identity of Hebron city, freedom of movement and basic rights of dignity and liberty as stated by International Law.

The soldiers resorted to excessive force against the nonviolent protesters, and abducted Ra’ed Abu Mayyala, 35, who is also a volunteer with the Israeli Information Center for Human Rights in the Occupied Territories (B’Tselem).

Issa Amro, the coordinator of the Youth Coalition against Settlements, said this activity is the beginning of various demonstrations against an illegal Israeli order to “develop the Jewish quarter in Hebron” to officially recognize it as a settlement under the full control of the “Civil Administration Office.”

This could mean the removal of native Palestinians, and the illegal confiscation and annexation of their property.

Amro added that preparations are underway for an international campaign titled “Hebron is a Palestinian City and not for Settlers,” aiming at ending the apartheid and segregation polices in the city, and reopening all closed Palestinian roads and homes, by removing the illegal colonists from the heart of the city.

Responding to the decision, the Israeli Peace Now Movement said, “By granting an official status to the Hebron settlers, the Israeli government is formalizing the apartheid system in the city. This step, which happened immediately following the announcement of the evacuation of the settlers who took over a house in Hebron, is another illustration of the policy of compensating the most extreme settlers for their illegal actions.

“It appears that the order does not create a new local authority or a new community within a regional authority, but rather a settler body with a certain degree of administrative power. Needless to say, this body will not include any Palestinian representation.”