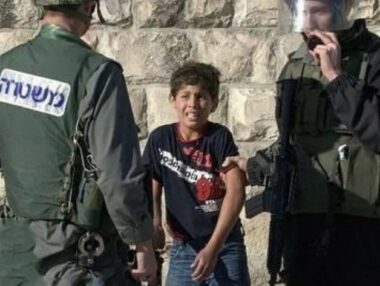 Israeli soldiers attacked and injured, Monday, a Palestinian child while walking to his school in Hebron city, in the southern part of the occupied West Bank.

The child’s father, Raed Tamimi, stated that his son, Montaser, 14, while walking to his school, not far from home, when the soldiers stopped him at the Abu ar-Reesh military roadblock, near the Ibrahimi Mosque in Hebron.

He added the soldiers repeatedly struck and beat up his son, causing various injuries to the head as well as other parts of his body, in addition to searching him and his school bag.

Hebron city has numerous Israeli military roadblocks impeding the freedom of movement of the Palestinians, which also forces the Palestinian children to pass through many of these roadblocks, where they are repeatedly searched, and in many cases, assaulted and abducted.

The Israeli army also frequently installs roadblocks around Palestinian schools, in addition to frequently firing live rounds and gas bombs at them, and invading them.