Father Hanna: “Supporting Our People In Sheikh Jarrah Is A National And Humanitarian Duty” 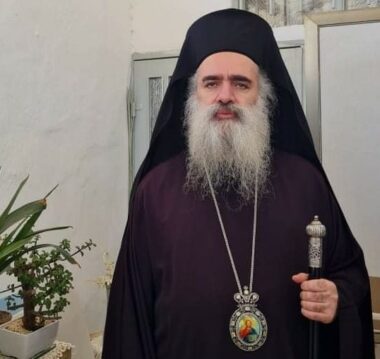 Father Attallah Hanna,  the Archbishop of Sebastia from the Greek Orthodox Patriarchate of Jerusalem, stated that supporting the Palestinian people in Sheikh Jarrah, and other parts of occupied Jerusalem, is a national and humanitarian duty to any person who believes in real justice and equality.

His statements came during a meeting with Palestinians from the Sheikh Jarrah neighborhood, in occupied Jerusalem, who are subject to constant Israeli violations, and ongoing attempts to displace them for the benefit of the illegal Israeli colonialist settlers.

“The Palestinians in Sheikh Jarrah, as well as Silwan and other parts of Jerusalem, are still facing these Israeli attempts to uproot them from their homes and lands,” Father Hanna said, “We salute the Palestinian families in Sheikh Jarrah, Silwan, and the rest of occupied Jerusalem, for continuing to be steadfast in the face of oppression and escalating Israeli violations.”

|Analysis: Who is Archbishop Atallah Hanna, and Why Does Israel Hate Him? By Ramzy Baroud|

He added that standing in solidarity and support of the families in Sheikh Jarrah as they continue their struggle, is a humanitarian, national and moral obligation, and called for more solidarity around the world with these families and neighborhoods.

In Sheikh Jarrah, eight families of 19 households of 87 Palestinians, are at imminent risk of forcible transfer, due to the separate case filed against them before Israeli courts by the settler organization Nahalat Shimon International.

Alarmingly, Nahalat Shimon International has previously evicted three Palestinian families of around 67 Palestinians from the aforementioned neighborhood in 2008 and 2009.