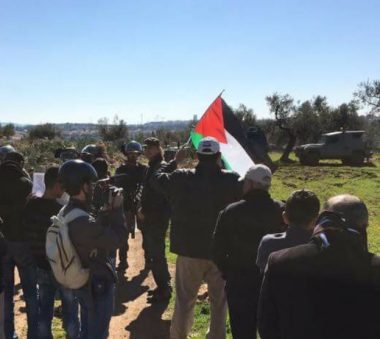 Israeli soldiers attacked, Friday, several nonviolent protesters, including Israeli peace activists and cameramen, after the army assaulted the weekly procession against the Annexation Wall and colonies, in Ni’lin village, west of the central West Bank city of Ramallah.

Local sources said the soldiers ambushed the protesters as they peacefully marched from the village, heading towards the Palestinian orchards, and started firing gas bombs at them.

The soldiers also assaulted many nonviolent protesters, including cameramen, and briefly detained them.

The protest in Ni’lin also commemorates the ninth anniversary of the death of Yousef Ahmad Amira, and a child, identified as Ahmad Husam, who were killed by the soldiers near the Annexation Wall.