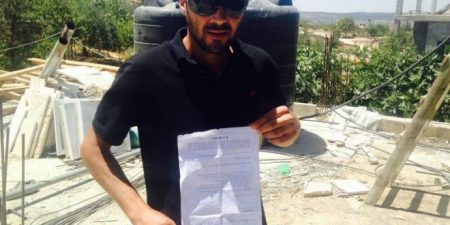 Last week, Israeli occupation authorities handed out demolition threats for 14 Palestinian homes in Al-Walaja village, about four kilometers northwest of Bethlehem City, under the pretext of having no building permit, and refuses to give them any permits at the same time.

The families, whose homes would be demolished by 9 August, live in an ongoing state of fear and anxiety for their future, especially that they have built these houses themselves and over the years.

Ahmed al-Atrash said that Israeli authorities served him with the decision to demolish his house, which he built on top of his parent’s home.

The family home was inhabited by 15 people, a few days ago. The parents’ house was the first house to be demolished in the village, in the past. The family has a deadline to object, until 11 August.
Ahmed says that the occupation refused all attempts to halt the demolition order. The lawyer offered his signature on a paper and vowed not to continue construction on the second floor in order to protect the ground floor where the family and all its members live.
Al-Atrash called on all Palestinian parties and human rights organizations to support the family, saying that he is continuing with the Arab members of the Israeli Knesset and representatives of human rights organizations to ensure that the house can not be demolished, which could lead to the demolition of the family home on the first floor.

For his part, head of the Al Walaja village council, Khader Al-A’raj, called on Palestinian political and legal authorities to support the steadfastness of the village of Walaja on more than one level, to be ready and capable of confronting the occupation’s plans, which aim to displace the villagers.

The village of Al Walaja, PNN further reports, has been a target for the occupation, and demolitions are one way to empty it of its people. He added that occupation authorities have demolished about 70 houses in the village since 1948.

Head of the PSCC, Munther Amira, said that the plans to target al-Walaja come within the framework of a protected campaign launched by the Israeli occupation and its settlers, represented by the government of the extreme right, which is based on the expansion of the settlements and ensuring its survival in the government.

Amira added that the tour was part of the ongoing attempts and efforts to expose the practices of the occupation and address them by various means, stressing the need to unify the various legal and field efforts because the unification of efforts proves that the Palestinian people are able to achieve field victories, which was proven during the attempt to impose new measures to control the Al-Aqsa Mosque, recently, and the failure of attempts to implement their own rules.

For his part, lawyer and activist Farid Al-Atrash, who is director of the Independent Commission for Human Rights, said that the suffering of the village of Al Walaja is due to unjust practices imposed on the Palestinian people, and is a model of the land confiscation and policy of house demolitions targeting to displace the people, and requires our collective intervention.