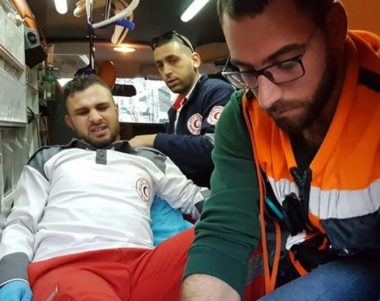 Israeli soldiers attacked, on Saturday evening, many Palestinian nonviolent protesters in Salahuddin Street, in occupied Jerusalem, in injured several Palestinians, including a medic, while marching against ongoing Israeli occupation, and the U.S. President’s illegal recognition of occupied Jerusalem as the unified capital of Israeli and his decision to move the U.S consulate to the city.

The Palestinian Red Crescent Society (PRC) said that it provided treatment to four Palestinians, including a medic who was shot with a concussion grenade while providing treatment to a wounded Palestinian.

One of the wounded Palestinians is Yasser Darwish, the secretary of Fateh movement in Jerusalem’s al-Isawiya town, who was shot with a rubber-coated steel bullet, before the soldiers abducted him. The PRC added that the soldiers also injured a Palestinian journalist, after the army assaulted many reporters.

It is worth mentioning that today’s protest is part of weekly activities in Salahuddin Street, against the illegal U.S. recognition of occupied Jerusalem as the unified capital of Israel, and its decision to move the consulate to the city.