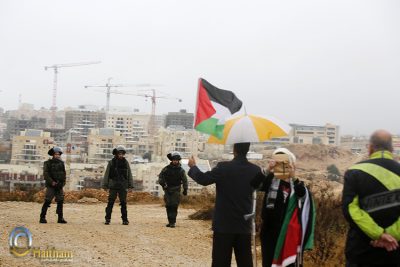 Israeli soldiers attacked, Friday, the weekly nonviolent protest against the Annexation Wall and colonies, in Bil’in village, near the central West Bank city of Ramallah. This week’s protest also marked the International Day for Solidarity with the Palestinian People.

Many Palestinian, Israeli, and international peace activists marched from the center of the village, despite the heavy rainfall, and held their procession marking the “International Day for Solidarity with the Palestinian People.”

The protesters marched carrying Palestinian flags, chanting to national unity, solidarity, and steadfastness in facing the illegal Israeli occupation of Palestine, and its colonies, in addition to calling for the release of all political prisoners.

As the marchers reached the iron gate of the Annexation Wall, the soldiers prevented them from advancing, chased many of them, and denied them entry to their lands, after declaring the area a “closed military zone.” 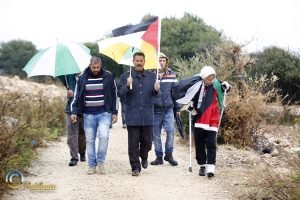 The Popular Committee against the Annexation Wall and Colonies, in Bil’in, called for expanding the solidarity, nonviolent protests against the ongoing, illegal Israeli occupation, in every part of Palestine, until liberation, and establishing an independent state, with occupied Jerusalem as its capital.

“In 1977, the General Assembly called for the annual observance of 29 November as the International Day of Solidarity with the Palestinian People (resolution 32/40 B). On that day, in 1947, the Assembly adopted the resolution on the partition of Palestine.

In resolution 60/37 of 1 December 2005, the Assembly requested the Committee on the Exercise of the Inalienable Rights of the Palestinian People and the Division for Palestinian Rights, as part of the observance of the International Day of Solidarity with the Palestinian People on 29 November, to continue to organize an annual exhibit on Palestinian rights or a cultural event in cooperation with the Permanent Observer Mission of Palestine to the UN.” – United Nations