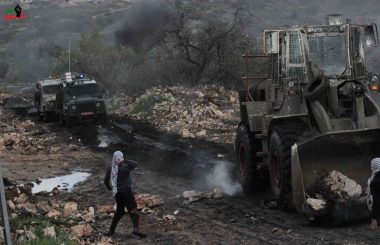 Israeli soldiers invaded, Friday, the town of Kufur Qaddoum, in the northern West Bank district of Qalqilia, and attacked the weekly protest against the Annexation Wall and colonies, leading to clashes.

He added that the soldiers fired rubber-coated bullets and gas bombs, while local youngsters hurled stones and bottles filled with paint on the invading military vehicles.

There have been no reports of injuries or arrests, and the soldiers left the town, after chasing many protesters and failing to abduct them.

The soldiers used their armored bulldozer to remove tires that some youngsters burnt in the street, to obstruct the military invasion.

Eshteiwy stated that the procession started peacefully, before the soldiers invaded the town, and that the protesters, accompanied by Israeli and international peace activists, marched while chanting for ending the illegal Israeli occupation of Palestinian, and ongoing popular resistance.