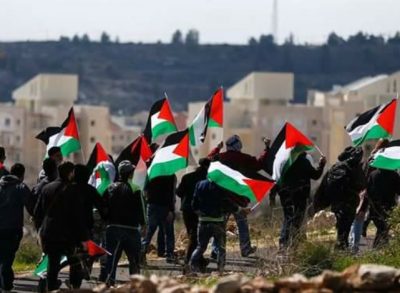 Palestinian medics sources have reported, Friday, that many protesters, including three Israeli activists, suffered the severe effects of teargas inhalation, after Israeli soldiers attacked the weekly nonviolent procession in Ni’lin village, west of Ramallah, in the occupied West Bank.

The procession started on Friday afternoon, after the nonviolent protesters gathered in the yard of a local health center, and marched towards the Annexation Wall.

They chanted against the ongoing Israeli occupation, violations and escalating construction and expansion of illegal colonies on Palestinian lands in the occupied West Bank, including East Jerusalem.

They also called for dismantling the illegal Israeli Annexation Wall, separating the Palestinians from each other and their lands.

The soldiers fired many gas bombs and concussion grenade, causing scores of protesters to suffer the severe effects of teargas inhalation.

Also Friday, the soldiers invaded the town of Kufur Qaddoum, in the northern West Bank district of Qalqilia, and attacked the weekly protest against the Annexation Wall and colonies, leading to clashes.