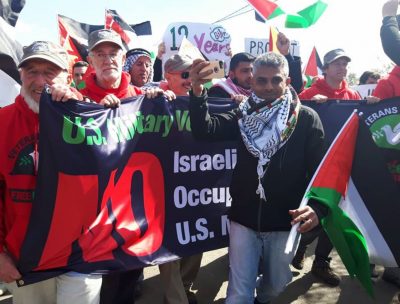 Photojournalist Haithem Khatib, from Bil’in, said a young man suffered a fracture in his leg, after the soldiers chased him while attempting to abduct him.

Khatib added that the soldiers reached the wounded young man, who was suffered severe pain due to the fracture, and other cuts and bruises, and left him on the ground.

Dr. Mustafa Barghouthi, the secretary-general of the Palestinian National Initiative, attended the procession and stated that “the racist Israeli apartheid wall will fall, just as the Berlin wall fell.”

“For twelve years, the locals, Israeli and international peace activists have been protesting despite Israel’s aggression that led to many casualties, including serious injuries and fatalities,” he said, “Only ongoing resistance, Boycott, Divestment and Sanctions will be able to counter the Israeli violations, and its apartheid system.”

It is worth mentioning that some protesters climbed the Annexation Wall, and raised Palestinian flags, in addition to opening the iron gate of the Wall, leading to clashes with the soldiers.

In addition, Palestinian medics sources have reported that many protesters, including three Israeli activists, suffered severe effects of teargas inhalation, after the soldiers attacked the weekly nonviolent procession in Ni’lin village, west of Ramallah.

Also Friday, the soldiers invaded the town of Kufur Qaddoum, in the northern West Bank district of Qalqilia, and attacked the weekly protest against the Annexation Wall and colonies, leading to clashes.