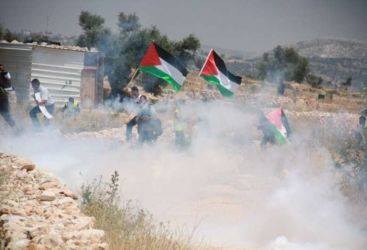 Israeli soldiers attacked, Friday, the weekly nonviolent protest against the illegal Israeli Annexation Wall and colonies, in Ni’lin village, west of Ramallah in the occupied West Bank, causing many to suffer the effects of teargas inhalation.

The Popular Committee in Ni’lin said the protest came in solidarity with local nonviolent activist Abdullah As’ad ‘Amira, who is held by Israel without charges or trial, and recently received the third consecutive renewal of his illegal Administrative Detention.

The committee added that the protest was held by many Palestinians, accompanied by Israeli and international peace activists, who managed to enter illegally confiscated Palestinian orchards, before the soldiers assaulted them.

The army fired many gas bombs and concussion grenades at the protesters, leading to clashes, and causing many to suffer the effects of teargas inhalation.