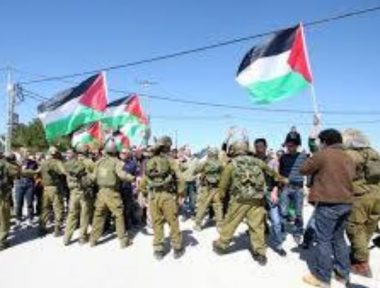 Israeli soldiers attacked, Friday, the weekly nonviolent procession against the Annexation Wall and colonies, in Nil’in village, west of the central West Bank city of Ramallah.

Mohammad Amira, a member of National Committee Against the Wall and Colonies in Ni’lin, said the nonviolent procession started from the center of the village, also marking the seventeenth anniversary of the Al-Aqsa Intifada.

Amira stated that the protesters marched towards the Annexation Wall, isolating the villagers from their lands and orchards, and fired many gas bombs and concussion grenades at them.

The soldiers also chased many protesters in an attempt to abduct them, but were unable to do so.