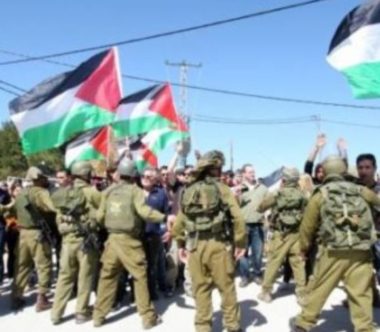 Israeli soldiers resorted, Friday, to the excessive use of force against the weekly nonviolent procession against the illegal Annexation Wall and Colonies in Ni’lin village, west of the central West Bank city of Ramallah, wounding several persons, and causing a few trees to burn.

Media sources said the soldiers fired a barrage of gas bombs at local and international peace activists, who marched from the center of the village, heading towards the villagers’ orchards, largely isolated behind the illegal wall.

They added that several nonviolent protesters suffered the effects of teargas inhalation, and received the needed treatment.

The soldiers also fired many gas bombs and concussion grenades into the Palestinian olive orchards, causing many trees to burn, before the firefighters managed to control the fire.