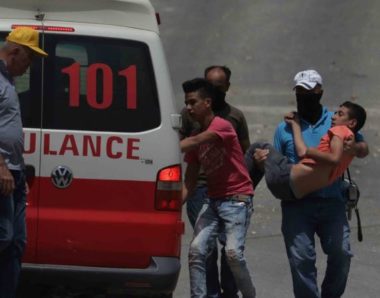 Israeli soldiers attacked, Friday, the weekly procession against the Annexation Wall and Colonies, in Kufur Qaddoum town, east of the northern West Bank city of Qalqilia, wounding four Palestinians with rubber-coated steel bullets, including a child who was injured in his chest.

Morad Eshteiwi, the media coordinator of the Popular Committee against the Annexation Wall and Colonies in Kufur Qaddoum, said the soldiers resorted to the excessive use of force against the protesters, and fired rubber-coated steel bullets and gas bombs at them.

He added that the soldiers also broke into one home, and tried to ambush the protesters, in addition to using an under-construction home to fire at the protesters.

Medical sources said four Palestinians were injured by the rubber-coated steel bullets, including two who were moved to a hospital; one of them is a child, and several others suffered the effects of teargas inhalation.

The protest started from the center of the village, while many carried big keys made of cardboard, symbolizing the determination to achieve the refugees’ internationally guaranteed Right of Return, and the ongoing struggle for the liberation of Palestine.