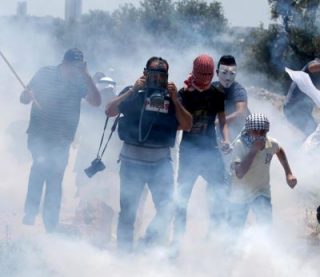 Several Palestinians, including a journalist, have been injured, Friday, after Israeli soldiers attacked the weekly nonviolent protest against the Annexation Wall and colonies in Ni’lin village, west of Ramallah.

This week’s protest commemorates the eight anniversary of the death of Yousef Ahmad Ameera, 17, who was shot by the soldiers in Ni’lin, on August 4, 2008.

The protesters also demanded the release of hunger-striking detainee Bilal Kayed, who is held under arbitrary administrative detention orders, without charges or trial, after he already served his 15.5 prison sentence, and called for the release of all detainees.

The soldiers fired many gas bombs and rubber-coated steel bullets on the protesters, causing dozens of suffer the effects of tear gas inhalation, while one journalist, identified as Hasan Dabbous, suffered a head injury after one of the gas bombs struck him in the head.

|Many Palestinians Injured In Kufur Qaddoum|