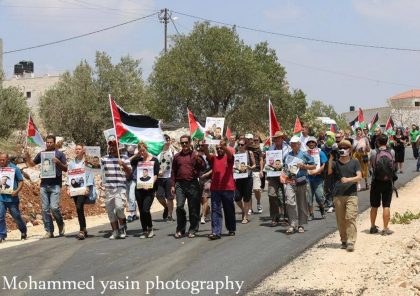 Video: Villagers of Bil’in, in the central West Bank district of Ramallah, held the weekly nonviolent protest, on Friday, in participation with Israeli activists and delegates from Norway, Japan, and Spain, demanding ending the illegal Israeli occupation, and marched in solidarity with hunger striking detainees in Israeli prisons.

The nonviolent protesters marched carrying Palestinian flags and posters of detainee Bilal Kayed, and dozens of striking detainees, while chanting against the ongoing Israeli occupation and violations.

They demanded the release of Kayed, who is held under arbitrary administrative detention orders, without charges or trial, after he already served his 15.5 prison sentence, and called for the release of all detainees.

Following the protest, the visiting delegates listened to the history of nonviolent struggle in Bil’in, and the successes of the ongoing protests in retrieving illegally confiscated Palestinian lands and rerouting the illegal Annexation Wall. 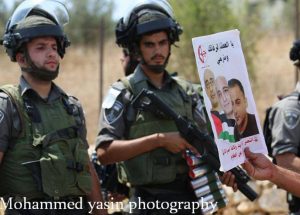 The delegates also listed to a detailed account of the types of weapons used by the soldiers, and the ongoing punitive invasions into the village as an act of collective punishment by the army in an attempt to stop the protests. 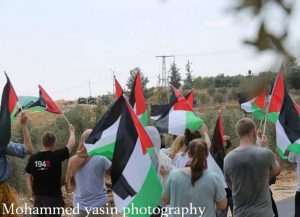 Also Friday, the soldiers released a child, identified as Hamza Khatib, who was kidnapped after the soldiers invaded Bil’in last week, and accused him of throwing stones at the military vehicles.

His lawyer managed to refute the military claims, and informed the court that the soldiers violently assaulted Khatib, and beat him on several parts of his body in addition to threatening to further harm him and his family.

|Many Palestinians Injured In Kufur Qaddoum|