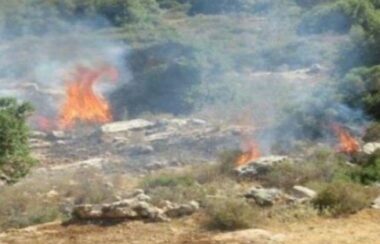 On Wednesday, Israeli soldiers burnt Palestinian agricultural lands near the perimeter fence, east of the Tuffah neighborhood, east of Gaza city in the besieged coastal region.

Media sources in Gaza said the soldiers came from military bases across the fence and deliberately burnt the Palestinian lands near the perimeter fence.

They added that the fire spread fast due to the heat and dry climate before the Palestinians managed to extinguish it.

It is worth mentioning that the army frequently invades and bulldozes Palestinian lands and installs sand hills in areas close to the perimeter fence to prevent the Palestinians from farming and tending to large sections of their land due to their proximity to the fence.

On Tuesday morning, several Israeli military vehicles invaded Palestinian farmlands near the perimeter fence in the northern part of the Gaza Strip.