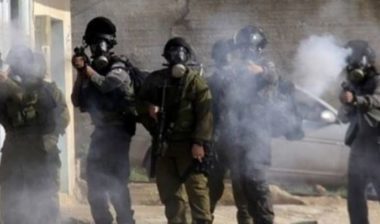 Israeli soldiers caused, on Wednesday morning, scores of schoolchildren to suffer the effects of teargas inhalation, after the army surrounded schools in southern Hebron, and attacked students protesting the invasion.

Rawhi Zaro, the head of the an-Nahda School, said the soldiers stopped and provoked many students while trying to enter their school, leading to protests, before the army fired many gas bombs and concussion grenades.

He added that dozens of students, and residents in the area, suffered the effects of teargas inhalation, and received the needed treatment.

There are eleven schools in the southern area of Hebron city, and are subject to frequent Israeli military violations, including repeated invasions, while the students are constantly stropped, harassed and searched by the soldiers, and some of them are also taken prisoner.