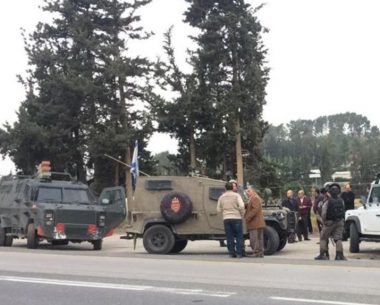 Israeli soldiers closed, Thursday, the entrances of Palestine Technical University – Kadoorie, al-‘Arroub Branch, north of the southern West Bank city of Hebron, and prevented the students and faculty from entering it, before wounding four.

The WAFA Palestinian News Agency said the Israeli Military Commander in southern West Bank has issued an order closing the main road, and entrances of the educational facility.

It added that the soldiers prevented the students and faculty members from entering the educational facility, an issue that forced them to take alternate, unpaved roads through Beit Ummar nearby town.

Many students protested the military violation against their educational facility, while the soldiers fired rubber-coated steel bullets and gas bombs, wounding four.

It is worth mentioning that, on Wednesday, the soldiers abducted a young Palestinian woman, a student of Kadoorie, and injured several students.

On Wednesday at night, the soldiers shot two young Palestinian men after opening fire at their car in Halhoul town, north of the southern West Bank city of Hebron.

On Thursday at dawn, the soldiers abducted a wounded Palestinian teen from his home in Deheishe refugee camp, south of Bethlehem, and injured several other Palestinians.

Also at dawn, the soldiers abducted Kamal al-Khatib, from his home in Deir Dibwan, east of the central West Bank city of Ramallah, and Jihad Khaled from Jaba’ town, southwest of Jenin, in northern West Bank.