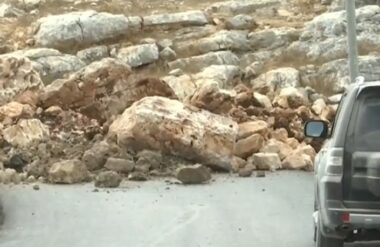 Israeli soldiers placed, Sunday, large rocks to close a road near Ya’bad town, west of the northern West Bank city of Jenin, and installed a roadblock on a nearby road before stopping cars and interrogating the Palestinians.

Media sources said the soldiers, accompanied by bulldozers, invaded an area near the Emreiha area, south of Ya’bad town, and installed the rocks to close a minor road leading to large areas of Palestinian lands and various surrounding areas.

They added that the soldiers forced the Palestinians to leave the area, after alleging it is now a closed zone, without providing any explanation.

Amjad Atatra, a member of Ya’bad Village Council, told Palestine TV that the closed road is essential because it links between various villages and towns, and also leads to Tulkarem.

He added that the closed road also isolated 6000 Dunams of Palestinian olive orchards in the Emreiha area.

Atatra also said that the soldiers previously prevented the Town Council from rehabilitating and expanding the main road in Ya’bad.

The closure of the road also forced schoolchildren to climb the rocks just to be able to return home from school.

The soldiers also installed a roadblock on the Kafrit-Ya’bad junction, leading to the Dothan military roadblock, before stopping and searching dozens of cars, and interrogated the Palestinians while inspecting their ID cards.

It is worth mentioning that Ya’bad is surrounded by six illegal Israeli colonies that were built on stolen Palestinian lands, and the army constantly invades the town and bulldozes lands, in addition to the currently ongoing work to expand one of the colonies.

Furthermore, the soldiers invaded Palestinian olive orchards near Kafrit, and searched them, while many army jeeps also invaded areas near Marka and Nazlet Zeid villages.

Ya’bad and surrounding areas have been subject to constant invasions and violations, including violent searches of homes, the bulldozing and uprooting of lands, and the demolition of property, in addition to the installation of various military roadblocks.