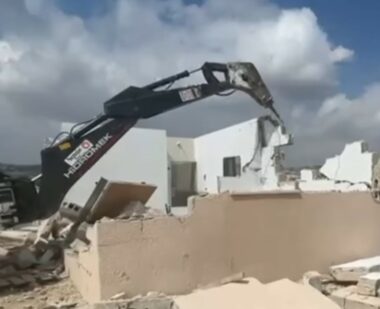 Israeli soldiers forced, Sunday, a Palestinian to demolish his home in Beit Hanina, north of the occupied Palestinian capital, Jerusalem, in the West Bank.

Local sources said the Palestinian, Arafat Rajabi, had to demolish his 50 square/meter home to avoid the excessively high fines and fees if the City Council uses its workers and equipment.

They added that Rajabi filed appeals with Israeli courts, and already paid hefty fines in an attempt to obtain a permit and house his ten family members.

It is worth mentioning that the home was only constructed three months ago.

Rajabi said he and his family will have to live in a tent because they cannot afford even a rental and have no other resources.

On Tuesday, September 7th, a Palestinian family from the al-Bustan neighborhood in Silwan town, in occupied Jerusalem, was forced to demolish its home after the City Council denied their appeals.

On Saturday, September 4th, the Israeli army forced a Palestinian to demolish his under-construction home in Wadi ar-Rababa neighborhood, in Silwan town, south of the Al-Aqsa Mosque, in Jerusalem.