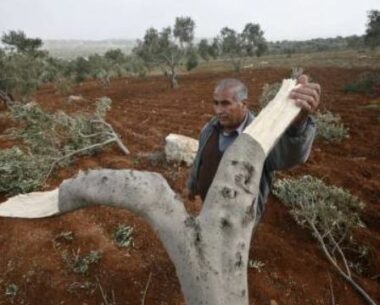 The Agricultural Committees of the Union Of Agricultural Work Committees has reported that Israeli soldiers and illegal colonialist settlers have cut and uprooted 15.315 trees in January of this year, in several parts of the occupied West Bank.

The Committee added that most of the cut and uprooted trees were olive, almond, and evergreens, and said that the Israeli army also illegally confiscated 1000 Dunams of Palestinian lands.

It its monthly report, the Agricultural Committees stated that the Israeli army resorted to the excessive use of force against Palestinians, protesting the ongoing theft, the destruction, and devastation of their lands, in several parts of the West Bank, causing dozens of injuries.

It also said that the first month of this year witnessed at least seven major attacks by Israeli colonists against farmers and shepherds, while plowing and working on their lands or herding their cattle, and also flooded Palestinian farmlands with wastewater, in Husan near Bethlehem, in addition to burying dozens of trees under tons of dirt near Salfit.

The army also demolished many retaining walls, in addition to destroying a well and dismantling many hothouses and other agricultural sheds.

In addition, the soldiers confiscated four water talks, tractors, and agricultural tools in the West Bank, after attacking the farmers.

In the Gaza Strip, the Israeli army and the navy carried out at least 25 violations, by firing live rounds at farmers on their lands across the eastern parts of the besieged Gaza Strip, and the fishermen along with their boats in Palestinian territorial waters in the coastal region.