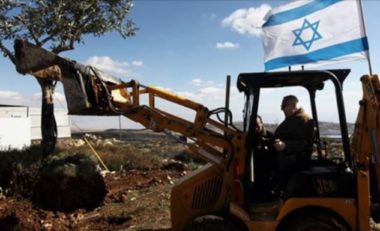 For the third consecutive day, Israeli bulldozers continued the uprooting of Palestinian lands, north of Khirbat Yanoun village, which belongs to Aqraba town council, south of the northern West Bank city of Nablus.

The uprooting of the Palestinians lands is carried out close to the illegal colonialist outpost, which was given the name (777), near The Gideonim (Ha’Gid’onim) illegal colony.

On Sunday morning, the army resumed the bulldozing of the Palestinian lands, after denying the Palestinians entry to them, and declaring them “closed zones.”

It is worth mentioning that Khirbat Yanoun village is surrounded by five illegal Israeli colonies and outposts, after Israel annexed more than %85 of the lands, owned by its indigenous Palestinian residents.

Israel also used hundreds of Dunams of the illegally confiscated Palestinian lands as a “natural reserve,” which means that they are no longer allowed to even enter them, let alone plant them.

All of Israel’s colonies in the occupied West Bank, including in and around occupied East Jerusalem, are illegal under International Law, various United Nations and Security Council resolutions, and the Fourth Geneva Convention to which Israel is a signatory and a constant violator.