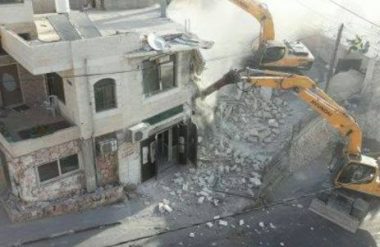 The WAFA Palestinian New Agency quoted Raed Abu Mayyala of Jerusalem’s Follow-Up Committee, stating that the building was modified ten years ago on the original structure, and included apartments and stores.

Abu Mayyala that dozens of soldiers and police officers, accompanied the City Council bulldozers, invaded the area, and surrounded the building before demolishing it.

The soldiers also instated a strict siege on the entire area, especially around the demolished building.