Soldiers Abduct Six Palestinians In Hebron, One In Jerusalem, Break Into shops, Warehouses, In Tulkarem 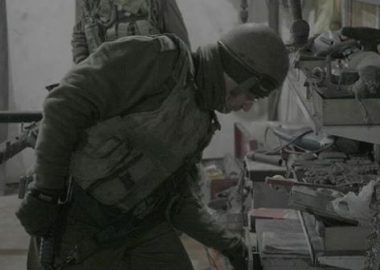 Israeli soldiers invaded, on Tuesday at dawn, several homes in occupied East Jerusalem, and Hebron in the southern part of the West Bank, violently searched them and abducted six Palestinians in Hebron and one in Jerusalem. The army also broke into shops and warehouses in Tulkarem, in northern West Bank.

The Hebron office of the Palestinian Prisoners’ Society (PPS) said the soldiers abducted Abdul-Halim Ibrahim Qfeisha, 16, and Saleh Raed Abu Markhiyya, from their homes in Hebron city, and another young man, identified as Ala’ Mohammad Ziyadat, from Bani Neim town, east of Hebron.

In related news, the soldiers abducted Amjad Hani Shweiki, 19, after invading his home in Silwan town, south of the Al-Aqsa Mosque, in Jerusalem.

The young man was cuffed and blindfolded, before the soldiers took him to an interrogation center in the city.

In Tulkarem, the soldiers invaded many shops and blacksmith workshops, in various neighborhoods in the city.

The invasions simultaneously took place in al-Haddadin road, north of Tulkarem, and Nablus Street. The soldiers broke the locks of the shops’ doors, and violently searched them, causing excessive damage.

The owners said the invasion has no legal foundation, and that the soldiers did not even present any justifications, and added that the sole purpose of these violations is to cause destruction.

Furthermore, the soldiers and personnel of the City Council in Jerusalem invaded the town of a-‘Isawiyya, in East Jerusalem, and demolish a two-story building, used for residence and commercial purposes.