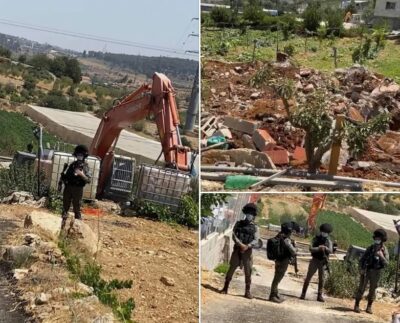 Israeli soldiers invaded, Tuesday, Beit Ummar town, north of the southern West Bank city of Hebron, and demolished a carwash facility, under the pretext of being constructed without a permit.

Mohammad Ayyad Awad, a local nonviolent media activist, said the carwash facility is in the al-Qarn area of Beit Ummar, and was built more than a month ago on privately-owned Palestinian lands.

Awad added that the demolished facility was about 200 square meters, owned by a local, identified as Emad Mohammad Abu Ayyash.

Earlier on Tuesday, the soldiers demolished a Palestinian home, and attempted to demolish three other homes, in Qarawat Bani Hassan village, northwest of Salfit in central West Bank.