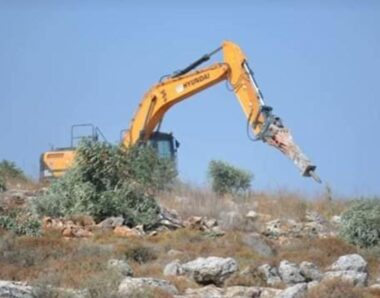 Deir Estia Mayor, Sa’id Zidan, stated that the soldiers, accompanied by bulldozers, invaded the area approximately at 6:00 a.m., and uprooted more than 200 olive trees, planted twenty years ago on an area of 14 dunams.

Zidan added that, about two months earlier, the owner of the land found military notices and maps on his land, claiming that his property is “state-owned,” before he filed appeals with Israeli courts, however, the army went ahead and uprooted the trees before a ruling was made.

He stated that the army started, also about two months ago, an extensive campaign targeting Palestinian lands, including issuing demolition orders of Palestinian property, and orders for uprooting hundreds of trees.

Deir Estia has about 35,500 Dunams of lands, almost 68% of them are located in Area C of the occupied West Bank, under full Israeli control.

The Israeli authorities have already designated 11,000 Dunams of Palestinian lands as “natural reserve,” placing them under the control of the military, and denying the Palestinians the right to plant trees or construct any sort of buildings. 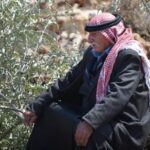 This also led to the demolition of Palestinian property, including structures, retaining walls, sheds, barns, hothouses, in addition to the uprooting of thousands of trees.

The residents have deeds proving ownership of their lands even before the state of Israel was established in the historic land of Palestine in 1948, and the occupation of the West Bank, including Jerusalem, and the Gaza Strip, in 1967. A large number of those deeds date back to the Ottoman era.

It is worth mentioning that Deir Estia is one of three Palestinian villages in Palestine known for the largest production of olives. It also has twelve springs, hundreds of almond trees, and citrus trees, especially in Qana Valley area.

While the Palestinians in that area continue to suffer from sharp water shortages for their lands and homes, Israel uses its largest water basin, the biggest in occupied Palestine, to provide its colonies with more than 280 million cubic meters of water.